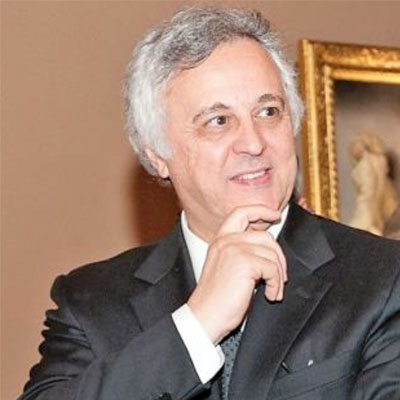 President of ALES SPA
Born in Rome in 1955, he graduated in Political Science.
His professional career began in 1980 in Radioblù, a radio station broadcasting local news, where he was a writer on cultural topics.
Between 1983 and 1989 he held executive positions in the marketing area of Diners Club d’Italia and SOPIN Spa.
His commitment to culture and cultural management started in 1989.
Under the appointment of the Fintermica Group, where he was the head of the Cultural Services Office and the Ecological Services Office, he was tasked with the planning, realization and management of the services system of the Palazzo delle Esposizioni (1990, Rome) and the Palazzo Ducale (1992, Genoa), introducing new forms of public-private cooperation.
From 1999 to 2003 he was CEO of the Lem Art Group, Italian leader company in museum merchandise.
From 2003 to 2007 he was Chief Operating Officer of the Azienda Speciale Palaexpo (Rome), where he oversaw services for the mounting of exhibitions, for visitors and for the maintenance of the premises. From 2005 he was also responsible for Communication and Marketing for the Azienda.
In 2003, under the appointment of the State and Rome City Council Mixed Commission, he undertook a feasibility study for the creation of a single card providing access to public museums.
From 2008 to 2016 he was CEO of the Azienda Speciale Palaexpo (Rome), where he was the head of the Communication Department, the Marketing Department and the External Relations Department. About 4,000 cultural events were organized in the venues managed by the Azienda (Scuderie del Quirinale, Palazzo delle Esposizioni, Casa del Cinema, Casa del Jazz), ranging from exhibitions to conferences, concerts, and science events. As regards museums, more than 50 prestigious exhibitions were organized by the Scuderie del Quirinale and the Palazzo delle Esposizioni.
Since 2016 he has been CEO of ALES SpA, in-house company of the Italian Ministry of Cultural Heritage and Activities, offering services in 16 Italian regions and managing the prestigious venue of the Scuderie del Quirinale.